To share your memory on the wall of Karen Lazar, sign in using one of the following options:

Highly intelligent, empathetic, with a wicked sense of humour, Karen had a well respected career in theater and film. She acted with the McGill Players, Saidye Bronfman Centre and Montreal Theatre Lab; and in Toronto with Theatre Française, U. of Toronto Graduate Centre and starred in the film The Life and Times of Alonzo Boyd.

Graduate of Sir George Williams University with a B.F.A., she completed her post grad PhD courses in the Theater Department at University of Toronto. She taught english language and communication skills to foreign trained doctors at U of T, and was a lecturer at the University of Waterloo.

She will be greatly missed by her family and friends.
Read Less

Receive notifications about information and event scheduling for Karen

You will receive any future notification messages.
No funeral details available.

We encourage you to share your most beloved memories of Karen here, so that the family and other loved ones can always see it. You can upload cherished photographs, or share your favorite stories, and can even comment on those shared by others.

Posted Sep 11, 2020 at 07:43pm
I am shocked and saddened by the news of Karen's passing. We were great friends for many years and I will remember her always as a beautiful, talented, intelligent and truly wonderful person. Rest in peace old friend.
Comment Share
Share via:
PS

Posted Sep 07, 2020 at 04:35pm
I just today heard the heartbreaking news about dear Karen's passing: I'm shocked and terribly saddened. What an extraordinary woman she was: a gifted actress, scholar and teacher, with a larger-than-life spirit and a wonderfully wicked sense of humour.

I had the privilege of working with Karen at the U of T's Graduate Centre for Study of Drama some years ago when she was pursuing first an MA degree and then a doctorate. She was one of the very best graduate students I ever had the pleasure of teaching, and I was deeply honoured when she asked me to be the Supervisor of her dissertation. The circumstances that kept her from completing her dissertation meant a major loss to research and scholarship in the field of Canadian Theatre History.

We stayed in touch until just a few years ago, getting together every once in a while to drink copious amounts of wine, talk for hours, and laugh and laugh. How lovely she was.

My deepest condolences to her family. Having had such a treasure in your lives, I can imagine how you must be mourning your loss of her.

Posted Sep 06, 2020 at 11:55am
My God, this comes as a shock. I never would have made it through the Drama PhD programme at UofT without Karen’s advice, insider info, perspective, and friendship. And Lord, was she funny. A great light has gone out, and I can only imagine the hole in the hearts of her family members. Karen was an unstoppable force, and I will miss her greatly.
Comment Share
Share via:
JF

Posted Sep 03, 2020 at 11:04am
I will always remember my aunt Puss as someone who was a great storyteller, someone who enjoyed good food and family gatherings. Swimming at Lake Mempremagog was our favorite and every year she tried to get us to go skinny dipping. I always declined. She was a good listener and always involved in our lives. I will miss you so very much. Love you always. Jess Fairchild
Comment Share
Share via:
AF

Posted Sep 02, 2020 at 11:54am
Little sister whom I looked over all your life, I am sad beyond belief at your passing... All the good times we shared here at Magog (and in Montreal) , making endless meals for the kids and their friends, the crazy activites at the lake and the wacky dancing in the living room will never be forgotten. Thinking of the great bat episode when we tried to catch or kill some bats flying around the bedrooms, while we were craling under a quilt trying to keep the bat out of our hair, makes me realize that I will never do that again with you. Nor will we grow old together as we had planned!
I will remember your empathy, your intelligence and interest in the world but mostly the love you showed all of our family!
I will miss you greatly.
Your sister Andrea
Comment Share
Share via: 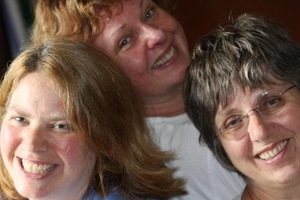