To share your memory on the wall of Marisa Piattelli, sign in using one of the following options:

It is with enormous grief and sadness that we announce the passing of Marisa on June 10th, 2020, at Princess Margaret Hospital, after a long and private battle with ... Read More
Marisa Jennifer Piattelli
December 21st, 1959 – June 10th, 2020

It is with enormous grief and sadness that we announce the passing of Marisa on June 10th, 2020, at Princess Margaret Hospital, after a long and private battle with cancer.

Marisa was a devoted, inspiring, and loving mother, wife, and daughter. Endowed with a deep sense of tempered strength and fortitude, she was always guided in all deeds and actions ever undertaken, by a dignified and noble sense of compassion, love, and altruism: A permanent guiding and shining light for all who had the opportunity to know her. Passionate in her causes and keenly aware of social issues, she engaged in social activism aimed at the pursuit of social justice at every opportunity during her entire adult life. Promoting public attention to women’s health concerns and public policy were very important interests and causes in her life.

Marisa graduated from the University of St. Michael’s College, in the University of Toronto. After graduation, she joined the Department of External Affairs (Global Affairs Canada) as a Foreign Service Officer. In her career path as a diplomat, she held various positions and postings in Ottawa, in Geneva, and as Canada’s Vice-Consul in Milan. She was also posted in New York with Canada’s permanent mission at the United Nations when the Government of Canada held a seat at the Security Council. Further to that she was the Federal Government’s representative for World Youth Day held in Toronto in 2002. Marisa continued her career path as one of the original executives at the newly established Toronto Waterfront Corporation in which she spent the last fifteen years of her professional career achieving different executive positions. Marisa also contributed actively as a former board member of ICCO [Italian Chamber of Commerce of Ontario] and current board member of Women’s College Hospital.

Striving for meaning in a life lived and loved was always easy in Marisa’s presence: It touched, it guided, it encouraged and it soothed. It gave comfort to the traveling companions and inspired pride in us all by mere association. We the family are a testament to that and friends are the witnesses (thanks Julie!).

Marisa’s achievements were many and varied but I know as living partner that they all pale next to what she considers her two greatest and unmatchable achievements: Elise and Stefano, the true accomplishments of a living legacy.

Much love and admiration.

Special and dear gratitude to Doctors Lheureux and Oza and the team of Gynecologic Oncology at the Princess Margaret Cancer Center!

In lieu of flowers donations to Princess Margaret would be appreciated by Marisa. Please visit https://thepmcf.ca/MarisaPiatelli


Due to the current COVID conditions a private service will take place.

A public memorial will be held when normal conditions will allow.
Read Less

Receive notifications about information and event scheduling for Marisa

Donations are being accepted for: The Princess Margaret Cancer Foundation.

We encourage you to share your most beloved memories of Marisa here, so that the family and other loved ones can always see it. You can upload cherished photographs, or share your favorite stories, and can even comment on those shared by others.

Posted Jun 17, 2020 at 12:33pm
I very much enjoyed working with Marisa during World Youth Day 2002 at Downsview Park. She was the steady hand that always ensured that all issues were resolved with diplomacy and tact akin to her training. I kept in contact with her after her time during that event because of the genuine and principled person that she was. What a great loss to the community and to Canada she is.

Posted Jun 16, 2020 at 05:34pm
Our world has lost a very special and beautiful person. It is a privilege and honour to have had Marisa in my life.
Marisa and I met at the beginning of our cancer journey and we consoled each other for many years.
Marisa's compassion and empathy were boundless. She was intuitive, articulate, intelligent, and wise.
I am very deeply saddened and heartbroken about her passing.
I am so sorry for your loss.
My condolences to Bruno, Elise and Stefano and mother, Delia.
With love, to all of you.
Franca Pichini

Posted Jun 15, 2020 at 09:07pm
Our sincere and deepest condolences for your loss. Our thoughts and prayers are with you and your children. From Luciano Amicucci and family.
Comment Share
Share via:
NS

Posted Jun 15, 2020 at 10:03am
I had the pleasure of working with Marisa several years ago at Waterfront Toronto.
I found Marisa so charming, pleasant, wise and patient. Always the diplomat, working with her relieved the pressures and stresses of difficult issues - big or small. What a truly wonderful person. I pass on my prayers, thoughts and condolences.

Posted Jun 15, 2020 at 06:27am
IN MEMORY OF MARISA
This is how we want to remember you, Marisa, our cousin’s daughter.
You were splendid! Such splendour that is found in people who are kind, modest and intelligent. This was truly you - capable in your professional engagements, intelligent and quick to find solutions to problems whether personal or professional. Your innate kindness and modesty was immediately apparent not only in your work for the public good but to anyone who met you.
Your trips to Italy, the land of your roots, with your husband and children was always an occasion for cousins, aunts, uncles and friends to be reunited with the woman who proudly represented us in Canada and who returned to reaffirm her emotional ties and to testify that for her, who was used to living in large cities and mixing with people of all nations in the prestigious public roles she held, her spiritual place was here in Italy, in Abruzzo, in the small corner of Montupoli, at the foot of the sacred stones of the Maiella.
And here your memory and the sorrow for a life ended far too soon, taken from your beloved children, husband, mother and everyone who knew and loved you, will remain. As will the disheartening knowledge that we could not be there for you and your family in your last days.
But the memory of your fawn-like eyes and your open smile will linger in our hearts forever.
Farewell, Marisa.
Nadia , Marcella, Valeria and the others cousins in Italy.
Comment Share
Share via: 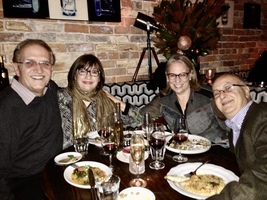