To share your memory on the wall of Donato Di Ciano, sign in using one of the following options:

The gesture that can change the world

The gesture that can change the world

Born in Italy, Natuch grew up with a fierce love for his parents and siblings (Camillo, Rosalinda, Maria and Tony), who were beloved throughout his l... Read More
Donato Di Ciano (“Natuch”, “Schatzi”)
September 4, 1937- February 2, 2021

Born in Italy, Natuch grew up with a fierce love for his parents and siblings (Camillo, Rosalinda, Maria and Tony), who were beloved throughout his life and his closest friends and confidants.

Donato always said that when he moved to Switzerland, he became more Swiss than Italian. There, he fell madly in love with Klara (also “Schatzi”), who became his devoted wife and life partner. When they emigrated to Canada together, he found his true homeland and became the proudest, most grateful Canadian. He even revered the great Maple Leaf, the Canadian flag, asserting (correctly) that it can be compared to all others as more beautiful and meaningful.

Donato loved the Maple Leaf not just for all that it symbolized about Canada, but also because of his deep connection with all things that grow out of the ground. Donato’s garden was an extension of his person. He was a brilliant pruner and grafter and his garden gave him as much life as he gave it. He was the recipient of the City of Toronto Traditional Garden award in 2006. The award recognized his blooming front lawn, but his backyard was perhaps the greater treasure: an acre of organic fruit and vegetable that he tended to with all his soul.

When he wasn’t gardening, his obsessions were sequential and all-consuming: hiking, tennis, squash, golf, running and yoga. The constant was biking; he maintains that as a young man no one could bike past him in the Swiss hills and for the first year of his chemo treatments, he biked to and from treatment.

Donato was self-taught and a closet intellectual. He willed success for himself and his entire extended family. He and Klara went to extra-ordinary lengths to make sure their children had solid educations and values. In his last years of life, he finally allowed himself the satisfaction of stating out loud that he married exceptionally well and was proud of his daughters Patricia (Ron) and Sandra (Maurizio) and granddaughters, Ofelia and Lila.

Due to COVID-19 a private family funeral will be held. In lieu of flowers, please direct donations to Humber River Hospital, where Donato received expert and compassionate care from Dr. Carmen Chung and the oncology team for almost 5 years. Please select “Cancer Care” from the dropdown menu at https://hrrhf.akaraisin.com/ui/giftsofgratitude/donations/start or by phone at 416.242.1000 ext. 81500.
Read Less

Receive notifications about information and event scheduling for Donato

There are no events scheduled. You can still show your support by sending flowers directly to the family, or planting a memorial tree in memory of Donato Di Ciano.
Plant a Tree

We encourage you to share your most beloved memories of Donato here, so that the family and other loved ones can always see it. You can upload cherished photographs, or share your favorite stories, and can even comment on those shared by others.

Posted Feb 16, 2021 at 10:47am
Please accept our most heartfelt sympathies for your loss... Our thoughts are with you and your family during this difficult time.

5 trees were planted in the memory of Donato Di Ciano

Posted Feb 12, 2021 at 04:01pm
Our deepest condolences to Klara & family. Our thoughts and prayers are with you all during this difficult time. So sorry to hear this.... my father will truly miss a caring neighbour. May he Rest in Peace. Mena & John Petrucci
Comment Share
Share via:
TH

Posted Feb 08, 2021 at 02:38pm
Wishing you peace to bring comfort, courage to face the days ahead and loving memories to forever hold in your hearts.

Posted Feb 08, 2021 at 02:35pm
Donato was a very special man, back in 1977 I walked into his shop to ask if he would sponsor the CTS fashion show. Without a second thought and not much explanation he said " yes that would be honored". From that moment on we became friends I would go to him for all our families floral needs and Paris Florist became the place I recommended to all the bridal parties.
Klara and family I want to extend my condolences to you all, he will forever be in our hearts for his warm kindness and generosity.
Comment Share
Share via:
HS 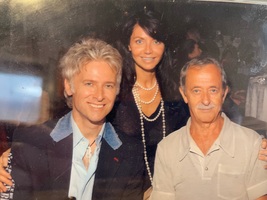