To share your memory on the wall of John Andrews, sign in using one of the following options:

John Andrews, a beloved husband, father and grandfather was born in Selo Neret in 1933 to Tanas and Luba, who had an older son Sam and younger daughter Para who unfortunately died at a young age in the village.

John Andrews, a beloved husband, father and grandfather was born in Selo Neret in 1933 to Tanas and Luba, who had an older son Sam and younger daughter Para who unfortunately died at a young age in the village.

Like a Hollywood love story our father married his childhood sweetheart Anna Melitsis in 1953, and in May 1954 Fran was born. As most Europeans did, Dad left the village to begin a new life in
Toronto Canada along side with his brother.

Working respectfully and tirelessly, Dad was able to fly Mom and Fran to Toronto to join him two years later; And then in December 1957 Chris arrived early in their Danforth home. Helen luckily arrived in a hospital, in August 1965.

Being the kind and generous person he was, Dad welcomed his parents to live with his family in Canada; where he and Mom dutifully cared for them.

In 1970 the family moved Euphrasia Drive to be near his brother and his family, Helen, Rick, Tom and Dan.

Working together with his brother at their 'Ronson Restaurant' Dad provided well, and always put his family first, except for wrestling, Dad loved this barbaric sport even taking Mom to Maple Leaf Gardens for an event. Dad was also a food shopaholic. He would leave the house without anyone noticing to buy a sweet treat or some other necessity.
And most of all.. Dad loved Mom's cooking, especially her home made bread and sweet vienik.... We all do.
Although Dad was was quiet and shy he would come up with great one liners that made us laugh.

Thanks to Fran and her late husband Mike, Dad and Mom got the travel bug and subsequently had many stamps in their passports; Especially to Australia where Helen met George.
Dad very much loved his grandchildren Olivia, Arthur and Christopher who also cherished their Dedo. On the numerous trips to Australia, Dad and Mom would go walking to the shops, returning with bags full of goodies and lamb cutlets.

Unfortunately Dad accidentally fell in 2015 which drastically changed his way of life but thankfully Mom and Chris selflessly and lovingly cared for him beautifully.
Read Less

Receive notifications about information and event scheduling for John

We encourage you to share your most beloved memories of John here, so that the family and other loved ones can always see it. You can upload cherished photographs, or share your favorite stories, and can even comment on those shared by others. 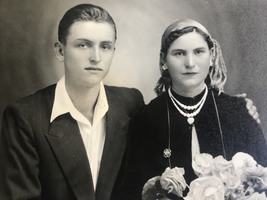 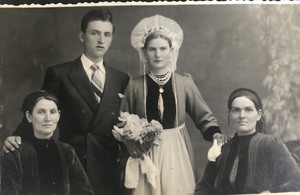