To share your memory on the wall of Millicent Dixon, sign in using one of the following options:

Millicent Dixon was born on June 16 1935 in the district of Stoney Gutt in the parish of St. Thomas, Jamaica to Ms. Gladys Robinson and Mr. Dixon , who died before she was born. Millicent grew into a happy go lucky... Read More
DIXON, Millicent,

Millicent Dixon was born on June 16 1935 in the district of Stoney Gutt in the parish of St. Thomas, Jamaica to Ms. Gladys Robinson and Mr. Dixon , who died before she was born. Millicent grew into a happy go lucky child making friends with all in Stoney Gutt. At the age of 6 Millicent attended the Middleton primary school and excelled in all subjects taught in those times.
Upon graduating school at 15 years old in 1950 ,her mother decided she should go and learn a skill. There was not much opportunity available for anyone in the country side. In1950 the only thing available was dress making, so she went to the local seamstress for the next 4 years to perfect the craft.
In 1954 Millicent met, Burnett Caine at the age of 19. The union produced a beautiful cuddly baby girl, she was so cute they named her Cutee. At 20 Millicent moved on to the nearby farm Mr. Caine was managing, their daughter Cutee was thriving into a rambunctious baby girl. She was the light of everyone's eyes . Sadly to all, Cutee passed away at about 5 years old, it was so traumatic for both parents, they never spoke about her for both their lives!. Only through close friends and family members knew of Cutee. Soon after in 1955 Millicent bore another child Michael and 3 years later Trevor. The two boys became the pride and joy of her entire life!. There was nothing she wouldn't do for them.
As Millicent grew into a hard working beautiful young woman, she wanted more out of life and turned her eyes to the mega work force in the country side. She found employment at the local textile store in Morant Bay , measuring and cutting cloth for sale as she had the experience from her earlier days in dressmaking. Millicent became very good at what she did and soon became the store owners number 1 employee they trusted her so much they would go away and leave the store for her to manage.


At this point in around 1965 Millicent filled with confidence and amazing work ethics decided she needed to explore outside her environment and started traveling the Caribbean islands looking for better opportunities. Places like Grand Cayman and The Bahamas, thus began her nomadic journey to Canada in 1969.
Millicent worked in Canada the early years as a domestic helper until 1974 she obtained her Canadian documents, she crossed the border and worked briefly in the United States. Soon after her first son Michael joined her and 2 years later second brother Trevor came in 1977. Millicent now had the pride and joys of her life beside her, even though they were in their early 20’s she still treated them as her babies, showering them with love, gifts and whatever the circumstances were she would always be there.
In the later years Millicent worked as a care giver for 15 years in a private home until her client passed away Her last job was working in a nursing home taking care of the physically challenged. She retired in 2006 and shortly after came down with dementia which progressed into Alzheimer’s Her two sons never left her side caring for her until the end. Millicent battled with dementia and Alzheimer’s for the past 12 years finally taking its toll of her brain functions. She became immobile and died 2 months shy of her 85th birthday on Saturday April 4th 2020. Leaving 4 sisters, 1 brother, 2 sons, 5 grandchildren and 4 great grandchildren. Even though she's gone , her memories we’ll carry with us until we meet up again.
Read Less

Receive notifications about information and event scheduling for Millicent

We encourage you to share your most beloved memories of Millicent here, so that the family and other loved ones can always see it. You can upload cherished photographs, or share your favorite stories, and can even comment on those shared by others. 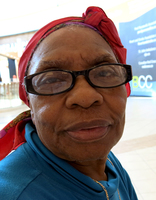